Home › Prayer › A Tragedy for Our Entire Country

A Tragedy for Our Entire Country 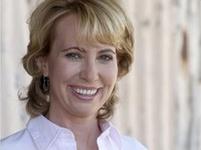 Oh, such PAIN and ANGER and SORROW yesterday morning when I came home from the Farmers’ Market and Kit told me that Congresswoman Gabrielle Giffords had been SHOT. We thought she had been killed.

This is Sandy’s congresswoman. I had seen the campaign signs when I was visiting in October. I knew I would have voted for her when I saw the signs against her. They alternated between blaming her for “Obamacare” and then accusing her of CUTTING MEDICARE.

Sarah Palin had her as one of the TARGETED districts — putting the district in the CROSS HAIRS of a gun scope. Her challenger had a fund raiser that invited people to shoot a fully loaded M-16 rifle. The Pima County Sheriff, Clarence Dupnik, was quoted in this morning’s paper, as saying “The anger, the hatred, the bigotry that goes on in this country is getting to be outrageous. And unfortunately, Arizona, I think, has become the capital.” Unstable folks are “activated” by Hate Talk.

Actions begin with words. God. And words begin in our hearts. And ALL of our HEARTS need cleansing. I FELT ENOUGH ANGER TO WANT TO STRIKE BACK. And You revealed to me, once again, that MY HEART could HATE just as much as the hearts of those folks I deplore. Only, YOU did pull me back. You had me call Sandy to PRAY — to pray for Gabby’s recovery — even though half the reports said she was dead. And to pray for all those hurting, frustrated folks who forget that we are ALL AMERICANS, all HUMAN.

Sigh, People who Hate WANT others to hate, too. That is the purpose of evil — to spread itself! Please help us to PRAY FOR our enemies.

Posted in Prayer, Praying for our enemies

One comment on “A Tragedy for Our Entire Country”