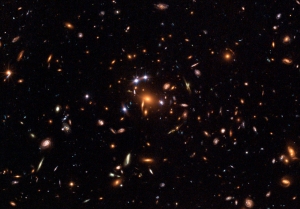 Looking at LOTS of distant galaxies

I’m up early due to a phone call. I’m  sounding frog-like . . . and going back to bed soon.  But while UP I noticed that my blog needed a new photo of distant galaxies because the one I have repeats and that repetition makes the universe look “regular” and it surely isn’t!

So, while sitting here looking at this photo — not of stars but of galaxies — I found myself thinking that WOW, there really are a LOT of galaxies in this Universe! And then the thought crept in . . . maybe You can’t care about each one of us?

Instantly, into my mind came the thought: Love is Built-in to the Very Structure of Everything. That’s a very good thought, God! And although it may not be very scientific it does feel true.

I’ve been listening to Fr. Greg Boyle talking with Krista Tippett On Being — the NPR radio show. He talks about walking late at night — seeing one of the local gang members — and going to sit down next to him on the steps. The young man says to him, “Funny you should show up right now. I was just praying ‘God, show me a sign that you’re as great as I think you are,’ and then you showed up.”

What touched me the most about that incident — wasn’t so much that Fr. Greg appeared right then — but that the young gang member could ask! Most of those gang members were abandoned by their fathers, beaten by their mothers and much worse. They have suffered more in just a few years than I have in decades. Suffering from parents passing on the “sins of the fathers” — passing on all the Stuff that crawls in when the protection of Hope is removed.

So Yes, Love is Built-in to the Very Structure of Everything — but it needs ongoing maintenance workers — like Fr. Boyle — like each one of us.