The Eiffel Tower and my Warrior Part — a matter of SCALE 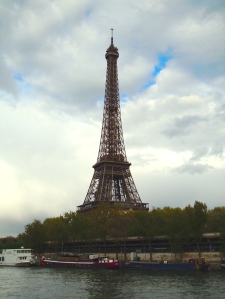 The Eiffel Tower as seen from our river boat this April

I confess that for years I had pooh-poohed the iconic Eiffel Tower as just TOO iconic. That was before I stood underneath it and was overwhelmed by its powerful presence. At a distance it is still impressive — but one only gets 5-10% of its impact.

That seems to me to be analogous to the difference between grasping a concept and having it Act Out in our Life. That’s what happened to me this week. For years I knew that I had a Warrior Part. After all, God, I come from a long line of Vikings.
But on Wednesday June, my Spiritual Director, asked me how my Warrior Part was doing. I checked in and reported that she was quite sad. I don’t know what exactly June said, God. In fact, I never can remember what she says. But, my response mentioned that perhaps we (my various Parts) could form an alliance.

But that evening after dinner she had me fill out a rebate form — one I hadn’t gotten to. She discovered that the offer had expired and she was upset. The next morning she called the company to complain — and by that afternoon she had collected the rebate. Then that evening before going to bed she went to a brokerage account that had been “sitting” for months and put in a buy order on three stocks. Chancellors of Exchequers don’t like money sitting around!

I’m not sure what’s next, God. But I’m looking forward to it!

Tagged with: Eiffel Tower, knowing vs being, the impact of scale, Warrior Parts
Posted in a matter of scale, accepting gifts sight unseen, adjusting, layer upon layer, Uncategorized