Home › connecting › The Power of Information

The Power of Information 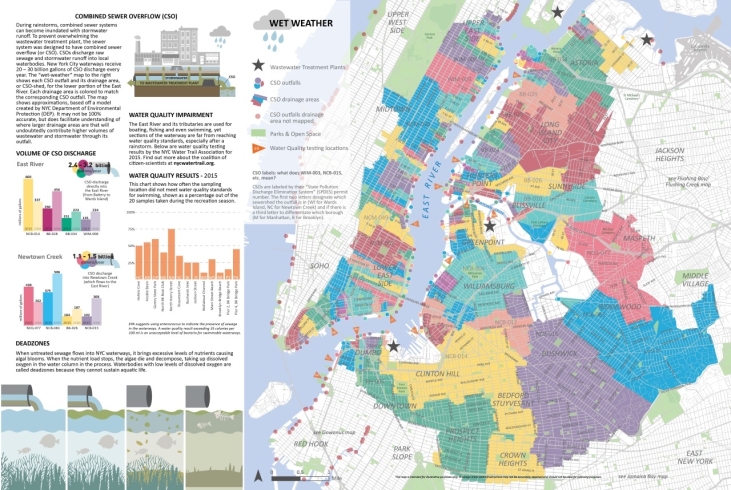 I came across a  interesting article in the August 14, 2017 Bloomberg Businessweek on mapping the ground UNDER New York City.  Subterranean cartographers are at work, God, combining a variety of maps to get a FULL information map of the city.

Speaking of full information the map above is of the combined sewage overflows in New York. Yikes! Now that is powerful information for change!

The Bloomberg article is about creating a combined map of everything underground in NYC: sewers, subways, electrical lines, gas lines, etc. One purpose showed up after 9/11 when they discovered on a map a huge tank of freon gas under the Trade Center. If one of the fires still burning underground reached the tank it would have exploded — releasing poison gas!  Knowing its existence and its location mattered!

In 2010 one of the cartographers overlaid a map of the flood zones for the city and saw that the electrical substation at East 13th Street was right in the middle of a flood zone.  He warned various government and corporate agencies. But, nothing had been done about it by the time Hurricane Sandy arrived in 2012 — flooding the substation and plunging a big part of Manhattan into darkness.

Ah yes. Information has to be used to be useful.

But that brings up a key difficulty. The knowledge of so many critical nodes could be ever so useful to terrorists. The Belgian government has ordered the creation of an underground infrastructure map of Flanders. But, when people need information from it they must apply and then only get information on a specific area.

Sigh.  Sad that information has to be so protected.

Hm. It just came to me that in the 1500s people didn’t want the Bible translated into languages that ordinary people spoke. They thought the knowledge was TOO important and too powerful to have it fall into the hands of people other than the Trained Experts.

I’m thinking now, God, of how powerful READING is . . . and how it was a crime to teach a slave to read . . . and how women still aren’t sent to school in some parts of the world.

Who knew an article on underground cartography could stir so many thoughts?