Home › Affirmation › There is no Non-Communication

There is no Non-Communication 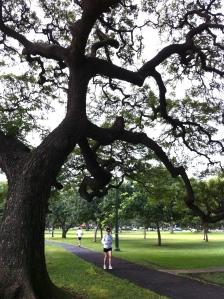 Almost every Friday I jog around Kapiolani Park with a friend. And because we are busy talking I don’t notice other joggers. But, yesterday, as I was out jogging at home I made it a point to wave, nod or say Good Morning to everyone I passed.

That’s is when it hit me that I was affirming them. Kit is fabulous at doing this — and he has been gently encouraging me to do the same thing.

Yesterday, I was doing my second blog for the day and wanted to quote Paul Watzlawick and needed to spell his name right.  I read him decades ago. In checking I stumbled on his FIVE AXIOMS and put that link in my blog. Then, later, I went back and reread the axioms.

Axiom 1 is Cannot not. “One cannot not communicate.” Because every behaviour is a kind of communication, people who are aware of each other are constantly communicating. Any perceivable behaviour, including the absence of action, has the potential to be interpreted by other people as having some meaning.”

That axiom seems to extend into all parts of life. It certainly put a new light on my behavior — or lack of it — while passing joggers. If I don’t “notice” the person I am passing — I am not “not communicating”. The absence of an acknowledgement MIGHT not be noticed. Or it MIGHT be seen as a sign of indifference or even disrespect. Oh DEAR!

Actually, God, I am not really so concerned about my fellow joggers, as about my family and friends. Silence isn’t always golden, is it God?  Hmm. How far, God, does our communication ripple?